DO SEEDS OF TERROR SPROUT FROM GRAVE OF DEMON HOTEL? 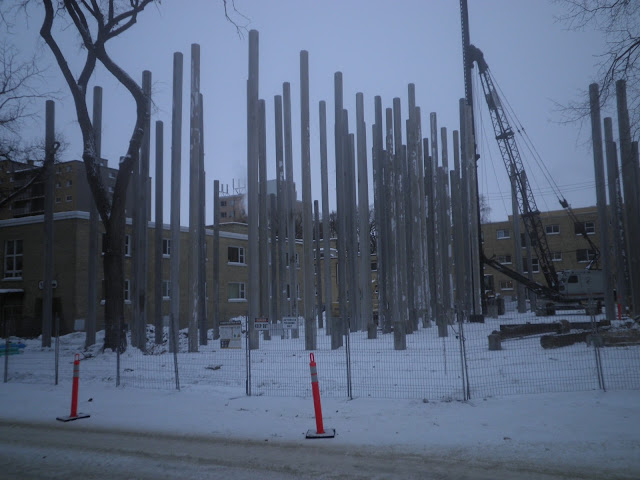 On a once silent plot of land, on a street in Downtown Winnipeg, residents awoke to find something different. The street is eerily called "Hargrave" and ironically halfway down the street between Broadway Avenue and the Assiniboine River  there indeed was a  grave. It was the grave of the once notorious structure nick-named Demon Hotel. Silent these last three years, after a long and mysterious legacy of fear and superstition was broken by a devastating fire, something now stirs among the ruins. 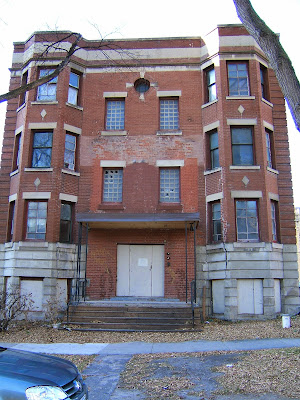 This Blog has devoted its time documenting the urban legend of Demon Hotel, from rumours of mysterious happenings when it was an occupied Downtown apartment building, to stories of supernatural occurrences after it was condemned and abandoned (at least by the Living), to its fiery destruction, publicly attributed to teenage arsonists. Finally all that was left was an empty plot of land overgrown with weeds and bushes, dust and trash, covering the subterranean ruins of the supposedly haunted building. It was thought that this was the end of the bizarre story of Demon Hotel, however suddenly could a new chapter be starting? 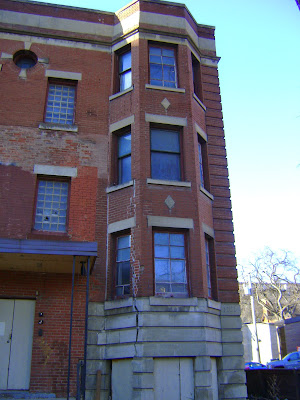 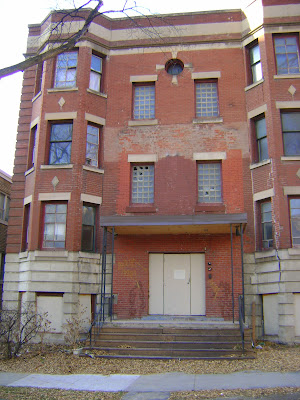 The legend dates back several years, to mysterious happenings even before the dilapidated apartment building was officially "condemned". Located across from the 19th Century Edwardian Dalnavert House, once thought haunted and now a museum, tall tales of ghostly events started to circulate. As the ominous looking building stood abandoned and rotting, year after year more rumors and legends began to accumulate. There is an urban myth of the Government worker who, after having several evasive and unsettling telephone contacts with a respondent, traced the person to their location -- the long abandoned apartment building on 44 Hargrave, where no living soul occupied. There were unconfirmed rumors of homeless people who were never seen again after seeking shelter in the ominous structure. Sightings of mysterious graffiti, stories of a wraith-like "Cat Lady" who appeared at night, and most of all, reports of terrifying ghostly visages peering through the broken windows continued, establishing the suggestion that supernatural manifestations emanated from that specific location. For further descriptions of these events, check this link. Myth or not, the very appearance of the building would fit right into a contemporary Horror Film, and many locals thought of it as a quintessential "Haunted House". 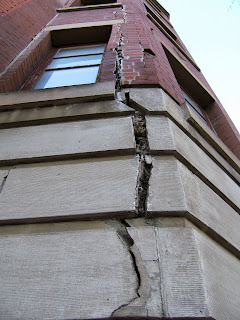 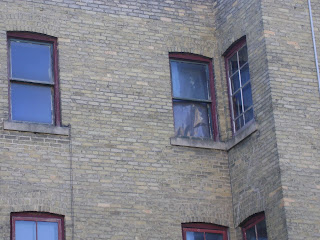 Inside the decaying structure were dark empty rooms and nightmarish basement corridors worthy of Freddy Krueger. There was even the terrifying documented tale of a local Urban Explorer who dared to venture inside the allegedly cursed building. To see what laid within Demon Hotel, check this link. 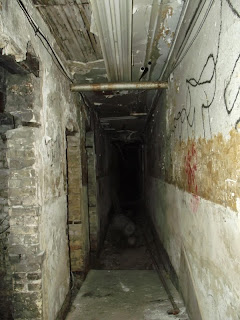 The catastrophic fire that destroyed the old Building was blamed on teenage vandals, however there is no record in the media of any convictions to the alleged crime, so to some there was still an element of mystery in the seeming end of the Demon Hotel saga. All was quiet, until recently the morning din of Downtown Winnipeg was overshadowed by ominous bangs and clangs of pile drivers from the site of the supposedly cursed lot. Something is being constructed over the grave of Demon Hotel. 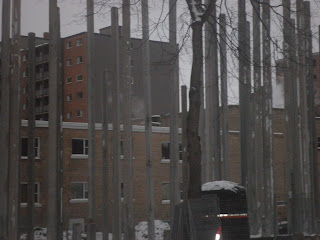 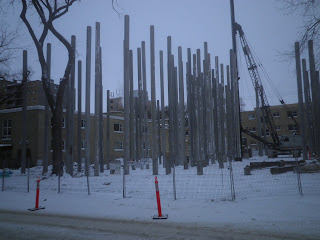 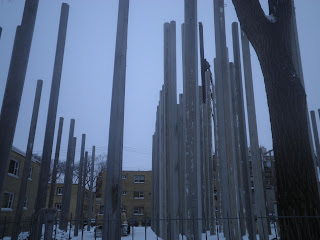 Some self-proclaimed local psychic experts even suggested that a place of tormented souls actually attracts other malevolent spirits, making the building a literal "Demon Hotel." Of course most people did not take the urban myth seriously, a local joke going, "when they're not in Hell, they stay at Demon Hotel." However, what if there was even a small bit of truth to these stories? What would it mean to the inhabitants of Hargrave and the surrounding streets, especially now that new construction threatens to disturb the slumber of things best left alone? What will be the effect to any people who enter the new structure? Did the new builders consider having the site subjected to exorcism rites before digging into the possibly cursed ground?

FACES OF DEMON HOTEL OVER THE YEARS 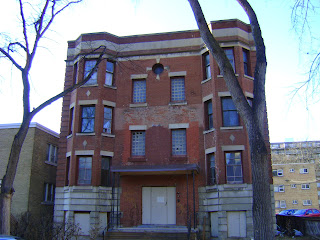 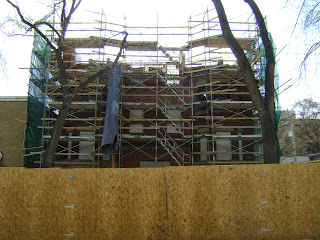 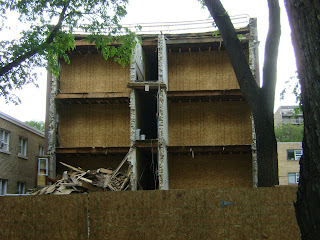 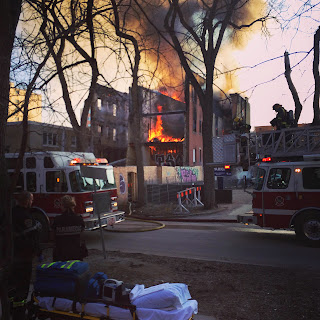 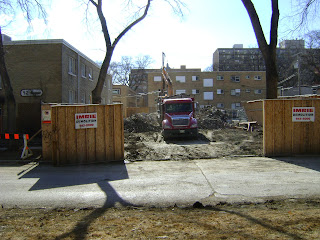 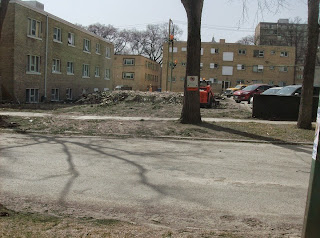 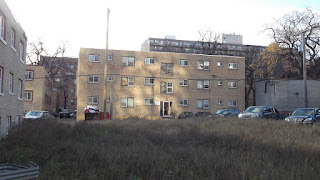 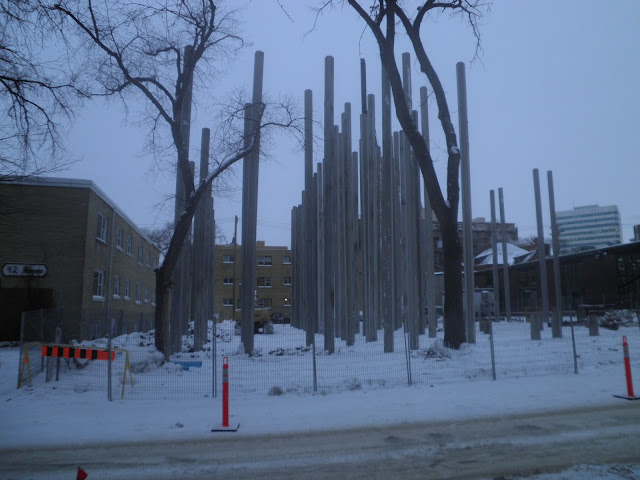 Are curses real? What happens when you build over the ruins of myth and superstition? Whatever happens, we will return to document any weird and mysterious happenings at the former location of the notorious place known to some as "Demon Hotel."