For years there have been reported sightings of ominous warnings scrawled on the outside of downtown Winnipeg's notorious "Demon Hotel." One such such occurrence was captured on film in 2010. 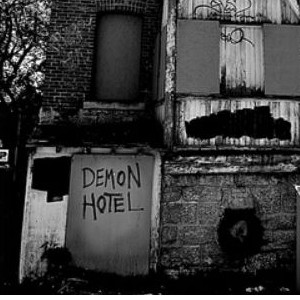 So disturbed were neighbours that the "Downtown Biz" were called in to paint over the words. However, some time after, the ghostly letters appeared again, seemingly from beneath the paint itself. Even after several attempts, they appeared again and again. 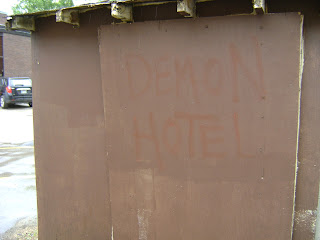 For a while there were no reports of paranormal writing on the Demon Hotel of Hargrave Street, as if any supernatural entities within were laying dormant. Then in the Fall of 2012, rumours of new blood-red graffiti emerged. Here is a recent photo. 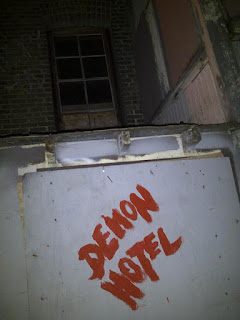 Whether this is a warning, or someone or something is marking its territory, who can say? Some have speculated that evil spirits displaced from a nearby Edwardian house, The Dalnavert (once rumoured to be haunted) have taken up residence at the now abandoned structure on Hargrave Street. Since evil attracts evil, other supernatural and demonic beings may have also moved in, truly turning the decaying dwelling into a "Demon Hotel." One Paranormal investigator who asked to remain anonymous, has raised the terrifying question of what would happen if the building were to be someday demolished: "The entire Downtown area could be inundated by homeless evil spirits, demons and ghosts."
﻿
﻿
Posted by Demon Hotel at 22:18