Could an abandoned apartment building in downtown be the site of paranormal activities? 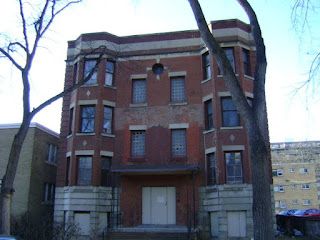 A self-professed paranormal expert who refused to be named says there have been rumours of stories involving supposed supernatural occurrences.

There have been tales of sightings of demonic faces peering through the broken, boarded-up windows. 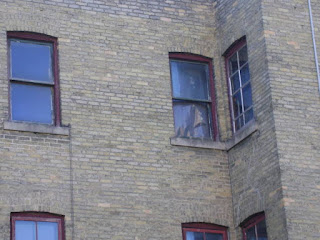 There have been witnesses claiming to have seen people crouching in front of the boarded-up doors, and when they looked back they had disappeared. Recently stories have circulated, purportedly originating among the Downtown homeless population, that a couple of transients who had sought sanctuary from the elements within the condemned structure have not been seen since.


One explanation considered by local Para-psychological theorists is that events at the Demon Hotel are linked to its vicinity adjacent to the Dalnavert house on . 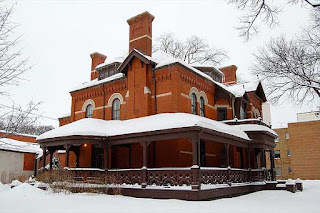 The Dalnavert house, like many old Victorian and Edwardian homes, may have been haunted. There is speculation the house may even be built over an old Indian burial ground, perhaps even used to bury those thought to be possessed by “evil spirits”. When a museum was constructed around the property, any paranormal entities dwelling in the house would be displaced, causing them to relocate to the more accommodating abandonment apartment building across the dark back lane. 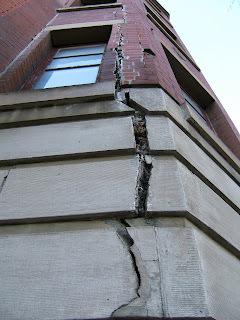 Since that incident unearthly graffiti appeared on the boarded-up exterior, with the unsettling warning: “Demon Hotel”. Concerned neighbours contacted city services who had the disturbing message painted over. A few days later the words inexplicably appeared again. Ever after other attempts to cover it up, the supernatural warning reappeared several more times.


Even more recently, sightings of the Demon Hotel warning have been reported by Downtown residents. 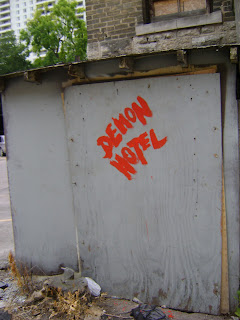